The Barclay Grounds, located at the intersection of N. High Street and W. Marshall, are unique and so important to the history, ecology and quality of life of the Borough that exceptional steps should be taken to preserve them for current and future generations.  They are important to the Borough in five ways: 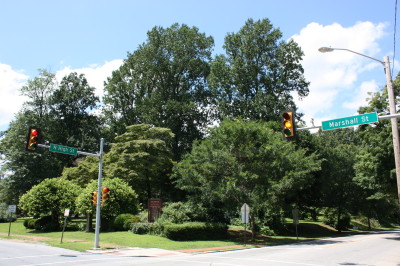 Project a desirable image for the Borough – Located in a prime location, on the main North-South route through the Borough, the Barclay grounds play a key role in establishing  West Chester as a beautiful, tree-lined, tranquil place to live, work, shop and dine

Precious Open Space – With the amount of construction of condominiums and townhouses currently underway, the Borough’s population is projected to increase by ~6% in the next few months.  The Barclay Grounds, along with the Borough parks represent the only undeveloped open space remaining in the Borough.  In the 1992/3 Borough Open Space and Recreation Plan the Barclay Grounds were identified as a “quasi-park”.  This open space is important to the quality of life of many of the Borough’s residents who use it as a park – in the same way it has been used for 80 years.

Historically Important – The historic Joshua Hartshorne Estate (a.k.a. The Barclay) is comprised of the entire block bordered by N. High St., W. Marshall St., N. Church St. and W. Virginia Avenue.  It is on the National Register of Historic Places because it is the only one of the West Chester estates (built in the late 1800’s) that has not been sub-divided and built on.  This is one of only 9 individually registered historic places in the Borough and according to a local historian acts as one of the “anchor properties” that support the historic status of the Borough in general.  According to the National Register, the “grounds and plantings” are one of the “essential physical features that help convey integrity of setting, location, feeling, materials and association of the period of use of the property as a nineteenth century country estate.”

Ecologically important – The trees are one of the most diverse collections of non-native specimen trees in the Borough of West Chester – and some of these magnificent trees (some of which are well over 100 feet high) are ~150 years old – spanning three centuries.  The number and variety of specimen trees on the property are strong evidence that Hartshorne intended his property to showcase uncommon non-native trees.  The many remarkable specimens include a big-leaf magnolia, a sixty foot high sweet buckeye, numerous flowering dogwoods, black oaks, Norway spruces, European larches, white pines, pin oaks, Japanese maples, a golden rain tree, an American holly, a white mulberry, an Austrian pine, a green ash, a shell-bark hickory, tulip poplars, a weeping cherry, and a sourwood.

Long cherished and protected by the Borough’s residents – There is a long history of this space being defended from development by the residents.  Going back as far as the 1960’s it has been successfully defended at least four times –on one occasion by a lady who ran up shouting “Over my dead body!” and proceeded to stand in front of the bulldozer.

See a slideshow explaining why the Barclay Grounds should be saved